So before I place (yet another) wanted ad’ I thought I’d check that these lower fork yokes can’t be saved. Had them stored for ages, thought these would be the easiest bit of the build, but go to pull the stanchions up through them tonight to find one side is out of line. Using a straight edge across the bottom confirms the issue. One side is bent down a little. Is it worth (with my rudimentary skills and equipment) attempting to heat (map gas only) and straighten? I fear I know the answer...... 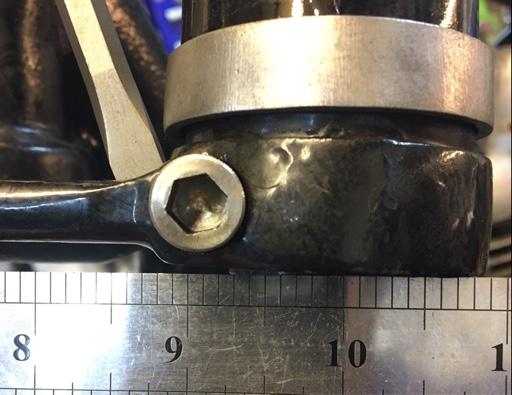 I wouldn't use heat. Tighten up the pinch screw and holding the stanchion at the very bottom, give it a good wrench sideways. You've nothing to loose by trying. You'll have to get a helper to hold the bike (I've always done this off the bike with it fixed in the vice). I've used an old stanchion with a big tube to extend the leverage.
Dave
Top

That's good to know (that all is not lost) Sadly I don't have an old stanchion so next query ..... do I not run the risk of bending the stanchion?

I'm going to sound daft but I guess you were using a proper puller?

With everything a bit loose I reckon a length of studding, cut down top nut, spacer (old socket) and some nuts would pull stanchions straight through and what's more make things straight at that bottom yoke.

Johnny B - yep, exactly that. Home made puller from threaded bar and old top nut.

Think it might have to come off and go in the vice.

Well, I was quite surprised that worked surprisingly well!

Dave16mct - yoke out and into vice, old bicycle frame cut up for tubing (I knew there’s a reason I kept that) and then a look of surprise that it worked. Thank you!

All back in the bike now.

NIce to hear that the simple solution worked.

Hi all. I've got a similar, but slightly different problem, and I'm hoping someone can come up with some ideas.

I've assembled the forks, and the stanchions have gone fully into the top yoke. But the gap between the yoke and fork crown on the left leg is about 3mm too long for combined length of the collars and headlamp bracket, resulting in the three components rattling about loosely. I fitted new rubbers under the bottom collars before I assembled them and the right leg is OK. I know I could fit packers under the loose collar(s) but I don't want to do that if there is a better fix, as the left leg would not match the right.

I haven't got a fork puller, so I did the assembly using the alternative method detailed in the manual; i.e. pulling the stanchions through the fork crown to six and a half inches before clamping them, and using a ratchet strap to compress the springs as mentioned elsewhere on this site. Major downside of this method was trying to get the top yoke on and lined up with the stem and two stanchions, while retaining the ball bearings in both races; an absolute nightmare and I've done it three times now and it's still not right. I'd rather not take it off again but I'm wondering if that's going to be the answer, as described in the earlier posts above. Any suggestions for an alternative solution would be greatly appreciated. Thanks.
Top
Post a reply
27 posts • Page 1 of 3 • 1, 2, 3